Synagogue rabbis today are teachers, administrators, and pastors.  They give sermons, raise money, teach classes, facilitate Jewish lifecycle events, answer halakhic questions, coordinate meetings, occasionally change lightbulbs, absorb the anger and anxiety of individuals for the sake of the community’s greater health, assist Bar and Bat Mitzvah children with their drashot, comfort the mourner, support the orphan, the widow and the needy, give musar when it is required, and aid in facilitating conversations of leadership, planning, and diplomacy.  None of these are forbidden to women and in some of these roles, women may, in fact, be more adept.

The word “ordination,” when used for women in Orthodoxy, feels unorthodox.  Not because there is a halachic problem with the ordination of women.  In fact, the title of ordination today has few, if no, halachic repercussions. Today semicha, or ordination, is a degree.  It means one has studied certain sections of Jewish law and knows how to apply them. 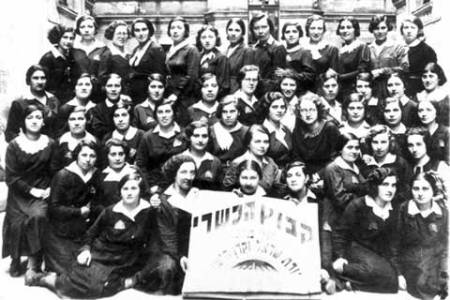 During the post World War I era, Sarah Schenirer, a Polish seamstress with a passion for Jewish tradition, developed the first school system for Orthodox girls in history. By the eve of World War II, the network encompassed over two hundred and fifty schools with more than forty thousand pupils, primarily in Eastern Europe. Pictured here is the second graduating class of the Bais Ya’akov in Lodz, Poland, in 1934. Institution: Yehudis Bobker, Sydney, Australia

My discomfort with Orthodox women receiving the title Rabbi is that it feels like a blurring of the lines, differences between genders.  In Orthodox life, especially within the realm of prayer and mitzvot, gender lines are real and differences between male and female palpable.  The Torah itself certainly is interested in the differences between male and female as evidenced by the first chapter of Genesis.  Male and female in that first chapter, as Rabbi Soloveitchik points out, are created side by side as equals, made together in the image of God and together commanded to populate and subdue the world.  According to Rabbi Soloveitchik, this first chapter is not overshadowed by the second chapter in which Hava is created from Adam but independently stands as its own human paradigm.  Male and female in this chapter are equal partners with the same jobs but who they are as individuals, and perhaps the way in which they will do those jobs, are different.   According to the Midrash, they are two opposite sides of one coin. We must take care not to ask that women do this job like men.   Given this paradigm, male and female spiritual leaders must have equal goals as the first male and female did, but they must retain their very different, perhaps opposite, natures and resulting methods.

Recently our Maharat who had worked at Bais Abraham for two years left her position for another one in the community.   My 14 year old daughter has asked me more than once if we will be hiring another Maharat.   Though the title, position, and idea of a woman who is equal in job stature, community influence, and responsibility to a rabbi is new, I sensed from my daughter’s repeated question that it had an impact on her vision of herself and her relationship to the Jewish community.

We spend a great deal of effort telling our daughters that they can do anything in the world that they want, they can go to seminary and learn Torah on a deep level, they can go to college, they can run companies and families and play sports. This is all new.  One hundred years ago such was not the case, and I suspect that most of us in the modern Orthodox community would not want to undo it all. I think the majority of modern Orthodox rabbis, whether implicitly or explicitly, tell their daughters that their gender will not limit them in what they can do in the larger world, and in the freedom, creativity, and opportunity they will have.

Rabbis, as communal spiritual leaders, guide the Jewish people in their relationship with the Almighty.   When the young women of our community see that there are women who can lead us on a spiritual level, women who can guide us in our relationship with Torah and the Master of the Universe, as communities and as individuals, they will see themselves as having a stake in the future of the Jewish people.  It will enable them to see the possibility of using all their strengths and vision for the Jewish people, Torah, and God.

To be a spiritual leader of the Jewish people, one must be given the space in which to do it.  When a woman spiritual leader, whatever her title, speaks from the pulpit regularly, it sends a message that this is serious, that she has the knowledge, power, and the insight to guide us, and to help us understand the will of the Divine and the words of the Torah.  When her name is on the letterhead and on the website, alongside the rabbi’s name, this brings a voice that was not there before, a vital voice.  Without the pulpit, without the letterhead, without the place on the website, the voice is not heard. It should not be the same voice as that of the rabbi, but it must be equally as esteemed.

I believe that every Orthodox community should have male leaders and female leaders. I don’t believe that we should label them all in the same way. They should not be pressured to be the same. Gender is real and, like our upbringing and our genes, it conditions the way in which we view the world and experience spiritual life.  Let’s not lose the female voice; we must encourage it.

This cannot happen if we do not make the space to be partners, to walk side by side, as the Torah tells us male and female walked in the beginning.

This entry was posted on Monday, November 30th, 2015 at 10:37 AM and is filed under Jewish Thought. You can follow any responses to this entry through the RSS 2.0 feed. Responses are currently closed, but you can trackback from your own site.